Why didn’t I write down whole poem in a graphic poem? 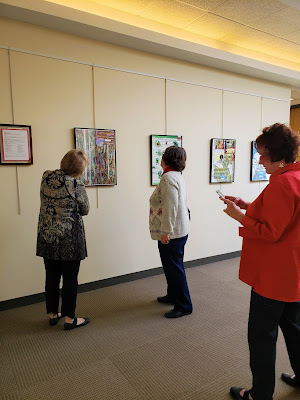 After my graphic poetry exhibition (thank you very much to those who visited. It was a wonderful success!), one of the audience members asked me a question, “Why didn’t you write down whole poem in a graphic poem?”

I am so glad that he asked me this question because this leads into my theme: Graphic Poetry=Trans.Sensory. The answer is “Yes, while I used a whole poem, it was wholly expressed with words. Some words were replaced with images.” Therefore, the audience can meld the words and images in their minds and mix the work’s graphical elements with their own internal manifestations.

But then he said, “I never knew I was allowed to write a poem like that.”

So, I told him about Japanese Emaki story telling technique. I have been studying Emaki (Japanese picture scroll) for a while now. Through my theme, I want my audience to transcend the boundaries of just the images shown and the images/emotions conjured from the words they read. They can exist at the same time in the same place, and this inspiration came from studying Emaki.

There are two fascinating books by Midori Sano. The books are educational, yet fun to learn about Emaki history and techniques. 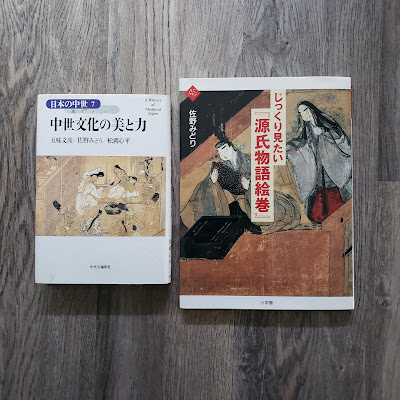 In order to understand the emaki art, we must understand its goals and approach to storytelling (like what visual cues trigger emotions in the viewers). They did not want to show much emotion in the art itself because the style challenged the viewer to connect more subtle visual cues with the emotional beats of the written story. Therefore, all the characters show minimal actions. Here is one example scene from “Tale of Genji”.

(You may like reading a review of “Tale of Genji” in RHINO Reviews.)

This is one of many fantastic, yet crazy moments of emaki. This picture shows the majority of the chapter of “Kashiwagi”. When I first saw it, I did not understand how it represented the original text because there are six characters with the same face and clothes.

A. The princess
B. The Suzaku Emperor
C. Genji
D. Three ladies
E. Kashiwagi is not present in this picture.

A very brief summery; Kashiwagi falls in love with Genji’s super young wife, the Princess. She conceived his child (Kaoru), eventually Genji would know about their secret relationship. Therefore, the Princess decided to become a nun. Her father, the Suzaku Emperor, supports her decision.

According to Midori Sano’s research, these lines and rectangles signify how complicated the characters’ emotions are under the surface (like the sorrow triangle). Also, their minimum gestures, the choice of paints, foreground and background paper, and color details of the kimonos show all that is needed to convey the story.

When the audiences look at the emaki, they would immediately understand the story of Kashiwagi even though there are no words. How amazing it is! So, I wanted to use this story telling technique into my graphic poem. 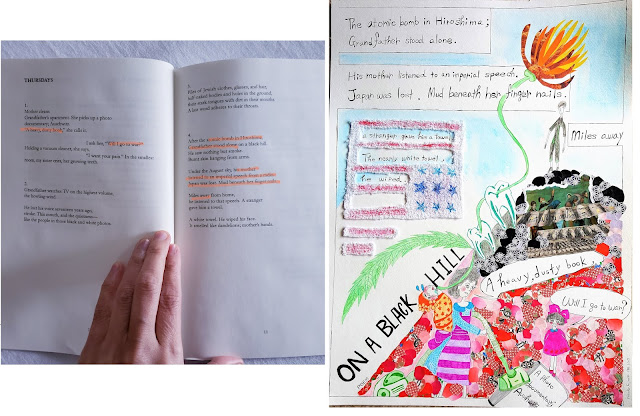 Again, I am going to use my graphic poem, “On a Black Hill”, and in the full-length book, the title is “Thursday”.

(Why are titles different?)

As you can see orange highlights, about 27% of words remain and the rest of the words become images. Like the chapter of Kashiwagi, I wanted this poem to tell a story in one glance.

In order to achieve that goal, I cut some lines from the original poem. For example, I cut the following sections in the graphic poem:

2.
Grandfather watches TV on the highest volume,
the howling-wind.

He lost his voice seventeen years ago,
Stroke. This mouth, and the quietness—
Like the people in those black and white photos.

3.
Piles of Jewish clothes, glasses, and hair,
Half-naked bodies and holes in the ground,
Their stark tongues with dirt in their mouths.
A last word adheres to their throats.

Why did I cut off these sections?

Because the sections are important in my written poem in a way they are not in the graphic poem. The graphic poem already shows an inappropriate, domestic moment: The mother is casually vacuuming a photo documentary of Auschwitz and the little girl is stepping on it with a caption, “Will I go to war?”

Historical documents and photographs may not mean anything if we are just like the innocent, perhaps naive girl, surrounded by words and pictures with no context. I may be the girl, but I do not want to be, and that is one of my themes in this graphic poem. There is the understanding viewpoint of the mother, and oblivious viewpoint of the girl, existing at the same time in the same room.

It takes guts to delete sections from the original poem when I create one-page graphic poems. (Indeed, this is currently leading to how to adapt a long poem in to a graphic poem.)

I received a response from one editor who said that the written portion is not interesting enough to grab the attention in my graphic poems. It is heartbreaking to hear, until I realize that different formats require different ingredients (think of a book being adapted into a movie as an example, there is no longer a narrator’s internal voice guiding the reader/viewer, so more emphasis is focused on actions and visual pacing to convey motivations).

It is not always easy to omit sections of your work you spent so much time on, but as an artist, the graphic poem will be better as a stand-alone work that does not rely on viewers to have read the poem to understand. I am still working on this aspect, and likely will continue to for some time.

One thing that I can clearly say is my favorite quote from my first-grade teacher, “If you progress one thing, the whole community learns from you. They will come up with new ideas that inspire you to ascend to the next level.” I like the thinking and I would like to share it with my poetry & art community.