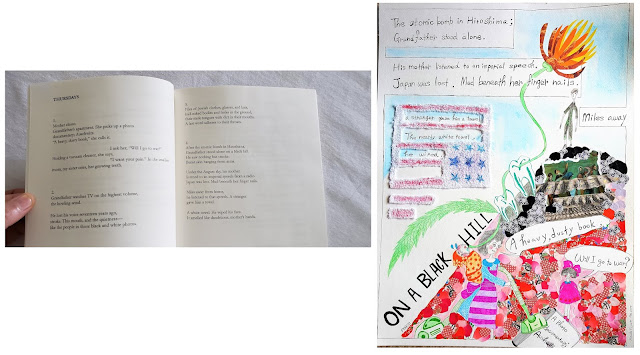 I have been analyzing my writing skill since my graphic poetry project was slowly launched around 2013. I personally think that my editing technique has developed after a collection of graphic poems, so I would like to share some of my thoughts!

For those who may not know my suitcase of a writing carrier (career), I was raised and educated in Japan. English is my second language. I have a master’s degree from Indiana University, but I have never belonged to MFA programs. For a decent period, I worked in the machine tool industry as a full-time worker, my husband has proofread my poems for the last seven years. Now I am taking time off for myself.

Some people may say, I have enough time on my hands; therefore, I could create both collections of graphic poems and poems, which I agree, but I also wrote a lot of poems that became two chapbooks (Home, No Home and Silver Seasons of Heartache) during my full-time working era. (I wrote “Silver Seasons” in my car during lunchbreaks!)

Here are my recent written poems’ acceptances after I finished my graphic poem collection:

They are fantastic, leading literature journals. In their issues, there are so many poets and writers who I truly admire, and I am so thrilled to be with them.

My writing habits and observations have not dramatically changed. The majority of my inspirations still come from life, interviews, and historical events. The final products may contain fictional elements; however, I always start with a factual moment, and then adapt these themes into first-person narrative.

“Thursday” is written after my grandfather’s war experience. Both of my grandfathers fought in World War II. One was in China, and the other was close to Hiroshima. World War II is one of my continuous themes and lifetime studies because histories are constantly changed by the views of each country involved. My grandfather lost his hearing after his Japanese commanders violently abused their power on him in China. Wars just produced ugly truth. My grandfathers did not openly talk about the war; however, they occasionally told me their inhuman experiences.

Comparing my written poem and graphic poem, you may notice two major differences. 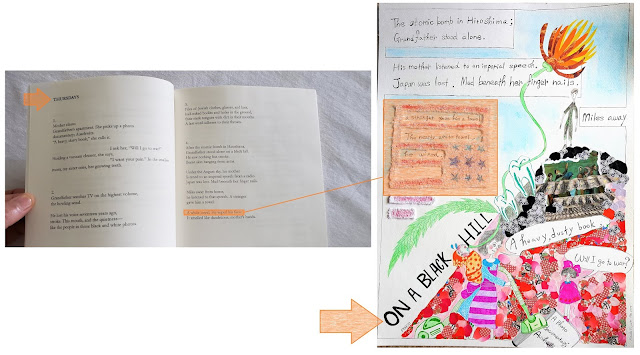 (Also you may enjoy listening to this poem broadcasted by Underline Poetry.)

Why are titles different?


The original title was "A Towel," and original published piece was in Chiron Review in 2008. Over ten years, this piece was shapeshifted and ended up in my full-length book, “Where I Was Born”.

In the full-length book, the title is “Thursday” because I wanted to flow previous poems of “Thursday” as a cohesive timeline; perhaps, as if time shifts as an ordinary day, like welcoming a Cleaning Thursday. Therefore, I chose the title “Thursday”.

The graphic poem’s title is “On a Black Hill”, not “A Towel”, nor “Thursday” because I wanted to use an image of towel. If the title is “A Towel” with the image of towel, it would be redundant. I also think that the detail of “Thursday” is not as important in this graphic poem because the image (mother is holding a baby and vacuuming) shows more details than describing a Cleaning Thursday in words. “On a Black Hill” came after conversations with my grandparents. They said that everything becomes black after bombings.

Why are the representations of white towel different?

I wanted to show the texture and roughness of an old towel. It was used, but it was white by the point view of war victims after a bombing. It was an act of kindness, “A stranger gave him a towel”, and it also represented as an obvious irritated symbol.

In fact, the towel was from my grandparent’s bathroom, which my grandmother tried to swap it with a new one. She was really offended that I used it for my project, so she gave me both new and old towels.

When I am going to translate my poem into a graphic poem, I ask myself questions, like why I want to replace the word “towel” with an actual old towel from my grandparent’s house. Why is it meaningful to my graphic poem and not just a novelty? How will these elements effect my audience?

This process of questions and answers developed my writing / editing skills for my regular written poems. I actively produced graphic poems the last two years (about one piece a week). Maybe the action becomes my writing weight lifting in a way.

The other day, I found myself discussing more details of grammatical rules with native English speakers. First though, I discussed with myself why I wanted to place a comma or use a particular adjective somewhere. And my proofreader (my husband) said that it is not the right place to add a comma, but I did it anyway since it had value. The other day, this poem was accepted by the Kenyon Review. Their editors suggested me to remove it, so my husband was right. But at least I had my reasons and thought them through. Changes and decisions in both poetry and graphic poetry are never arbitrary, but always serve a purpose.

Here is an actual photo from the Kenyon Review's editorial team. 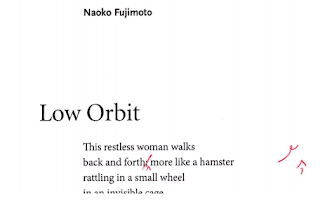